Listening to Teleradio Metropoli by Margine Operativo and Mondocane, we get lost among radio sounds, Andrea Cota’s voice and radio memories.

What is the sound of a festival? How does it affect the soundscape of a square? We are in Largo Spartaco during Attraversamenti Multipli Festival, we talk but we don’t understand each other very well, but this time it doesn’t depend entirely on our limited, growing knowledge of Italian. All around us is music, applause, footsteps, bicycles, bells, chatter. All sounds which are confined in words that cannot adequately describe them unless we use technology to record them. Let us be silent… and let us be carried away by the surrounding sounds for a few moments.

If you have been listening – if not, go again and do it -, if with closed eyes you just imagine yourself in the middle of Largo Spartaco and stay there, you will hear a special sound; at times it is a background voice telling the story behind each performance, at others the launch of a radio hit from the present or past years, at other times it is a dialogue with the artists in the programme or with some curious spectator, or even just silence while awaiting the beginning or end of a performance. This is the sound of Teleradio Metropoli, even before setting foot in the square, music and voices can already be heard.

We had a chat with Andrea Cota | MondoCane, this year’s speaker at Teleradio Metropoli (in the 2020 edition Simone Giustinelli and Stefano Patti of L’ultimo nastro di Krapp were on the microphones), he is a musician, producer and DJ who has been working with Margine Operativo since 2007 as a composer and stage musician for several theatre shows. This year with Margine Operativo he gives voice to that hybrid and mutant entity, a mixture of performance, installation, live radio and television broadcast with video contributions by Pako Graziani, which which is called Teleradio Metropoli.

Julio Ricardo: “Andrea, would you tell us about Teleradio Metropoli?”. 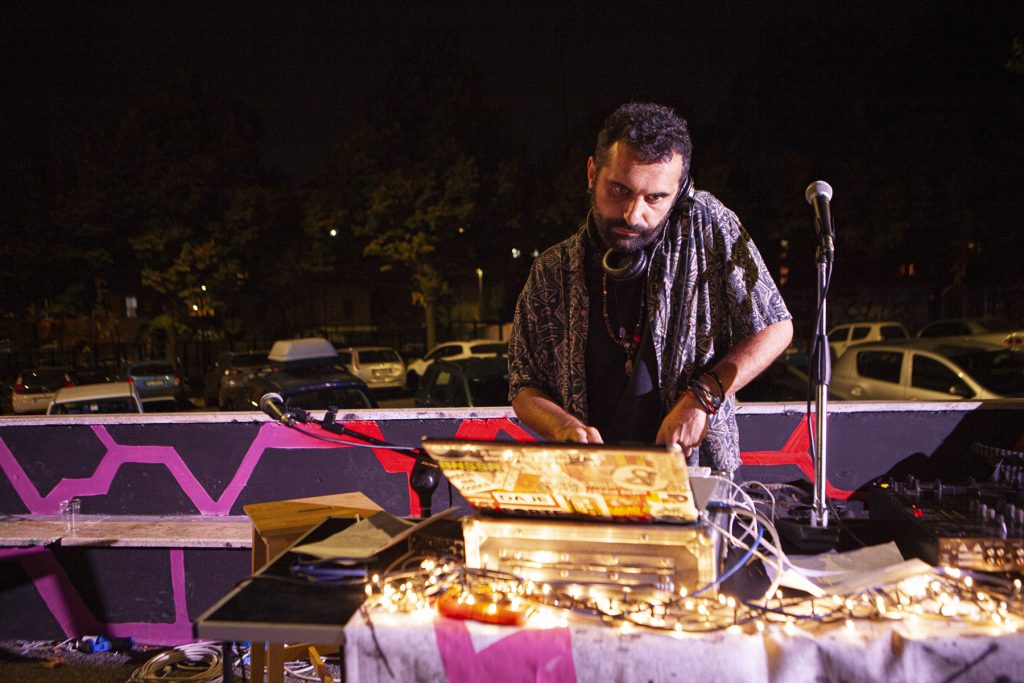 Andrea Cota: “Teleradio Metropoli is a Margine Operativo project that has been going on for many years. It started out as a voice from the metropolis in unconventional places, initially in underground stations and then at this festival. It is a radio which gives voice to places where things happen, where performances, installations, dance and Margine Operativo’s experiments alternate”.

Julio Ricardo: “How would you describe this particular radio experience as a means of broadcasting the festival?”

Andrea Cota: “Let’s say it’s not a typical radio, as it is conventionally understood. We call it a radio because its style is that of radio. We don’t broadcast anywhere else other than where we are at any given moment, so we could define it as instant radio.

Julio Ricardo: “What does a radio allow you to do in a context like Attraversamenti Multipli?”

Andrea Cota: ” The radio allows you to create the festival’s sound identity, it gives you the opportunity to remind people of the programme’s schedule and to interview its participants; this is more or less the approach, it’s about warming up the situation. In festivals, you know, in the quiet time between one performance and the next – especially in this kind of festival, with somewhat experimental operations -, the more generalist audience might often be taken aback; but with a voice, a radio, a person who gives you some guidance, who talks to you, who helps ease up certain passages, everything becomes a little warmer.

Julio Ricardo: So there’ s no downtime, you guys are there to lighten the mood.

Andrea Cota: ‘Exactly. And to blend it all in too. That’s the idea.

After saying goodbye to Andrea, we sit in a circle and continue to talk; meanwhile, Teleradio Metropoli is broadcasting in the square and each of us rediscovers an audio memory, an image by listening to it together. 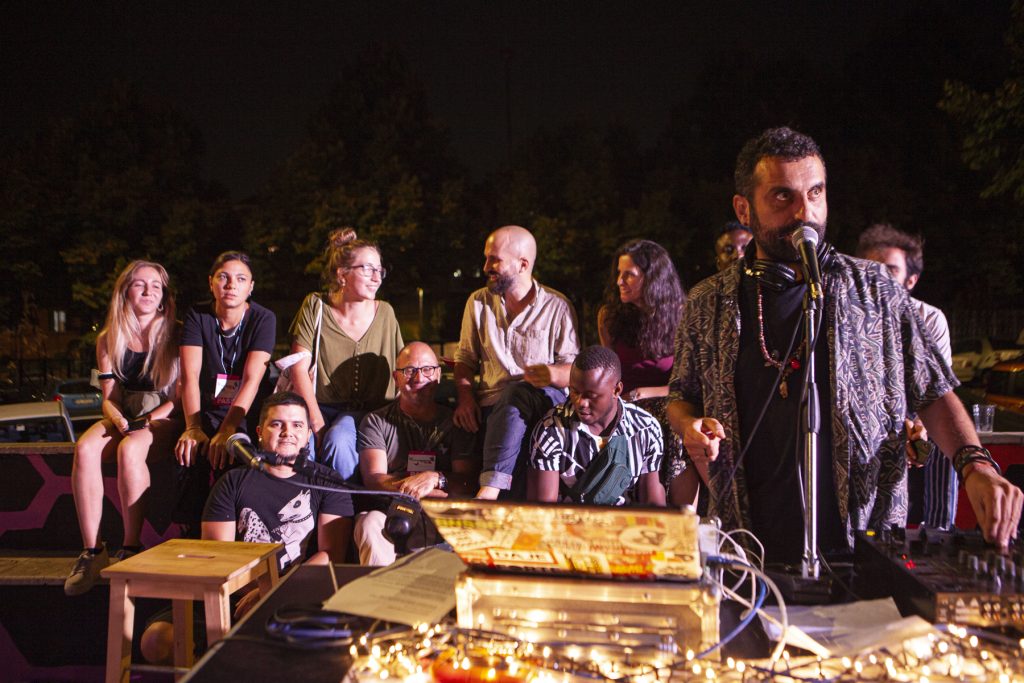 Ali Jubran (Libya): Libya first learned about radio at the end of the Italian era. There was a radio called Radio Tripoli which used to broadcast live. It would air the most popular singers. It was very uncommon to own a radio in Libya. There was a bar or a club in every neighbourhood where people would gather to listen to the radio until television and the internet came along, but in my family, we love radio very much so we still do listen to it. We listen to it in the morning while tidying up the house or when drinking coffee in the evening; when I go to work I always listen to the radio.  What I like about radio is that I feel like there is direct communication between people and the speaker, there is something that connects all of us.

Chiara Cecchini (Italy): When I think of the radio as a physical device, I always think of the car radio, and I associate the car radio with my childhood with the audio fairy tales we used to listen to with my sister and my father. There was the opening song and all the stories. That was radio for me. Dad had to turn off Radio Maria, which is a religious, prayers radio, so we would listen to the fairy tales. But as I grew older, the car radio – always associated with the car, since I never used it or considered it as a device out of the car, except at my grandparents’ house, where it was never used – when I became a driver, for me the radio meant being able to choose the music I wanted to listen to, and it became more experience-based. Driving always gives me a sense of freedom when I’m driving alone. The radio I listen to the most is Subasio or Virgin Radio, because they play a lot of old songs and I like that more than commercial radio. 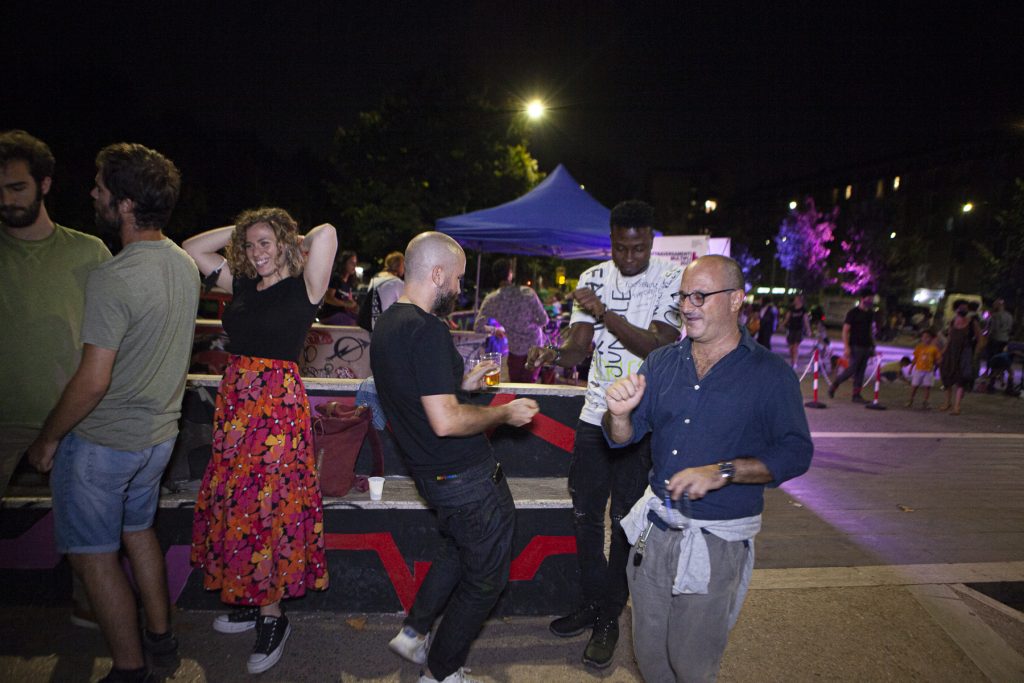 Jack Spittle (USA): When I think of Radio I think of Saturday mornings as a kid, walking down the wooden stairs, coming into the kitchen to the smell of coffee and pancakes. On the radio at that time there was always Car Talk, a national programme in which people would call and tell two mechanic brothers from Boston about their car problems, and the brothers would then try to solve their problems on the air. How could such a programme have captured so many people for over twenty years, even children like me? Because it was just a facade, a container. We wouldn’t listen to it out of interest for cars, we actually listened to it for the sympathy and symbiosis those speakers were able to communicate. They were like Hydra, two mouths of a single being. So self-ironic they were often lost in laughter, you could imagine them jumping up from their chairs, overcome with zest for life. All of this with a thick Bostonian accent, which as a child took me far away from my place. They did have tremendous technical expertise, and they loved cars, but they wouldn’t just talk about technology, they were constantly rambling on with psychological theories, stories, memories, and then, when confronted with wonder – “why does the speeding mechanism make the windscreen wipers go? – they just laughed.

Julio Ricardo (Cuba): I remember listening to the radio often in the evenings, after 8.30 p.m. every day, the minor advantage of Cuban radio is that you don’t have to waste time with advertisements, they don’t exist at all. You only hear news or music from the world, or ‘democratic’ propaganda. I vividly remember Radio Angulo with Parada Nocturna – which means evening stop – which started with Rock music from the 80s and 90s and ended with Top Hits from the world and Cuba.

Zara Kian (Iran): When I listen to the Radio, I travel back to my nostalgia, to Friday mornings, waking up to the sound of the Good Morning Iran programme. To breakfast with my family, the smell of tea and fresh bread. I remember listening to the stories on Friday at noon, and to the night story at nine every night, and to the night lullaby with which I fell asleep intoxicated. One of the most precious gifts I received as a teenager was a small pocket radio. 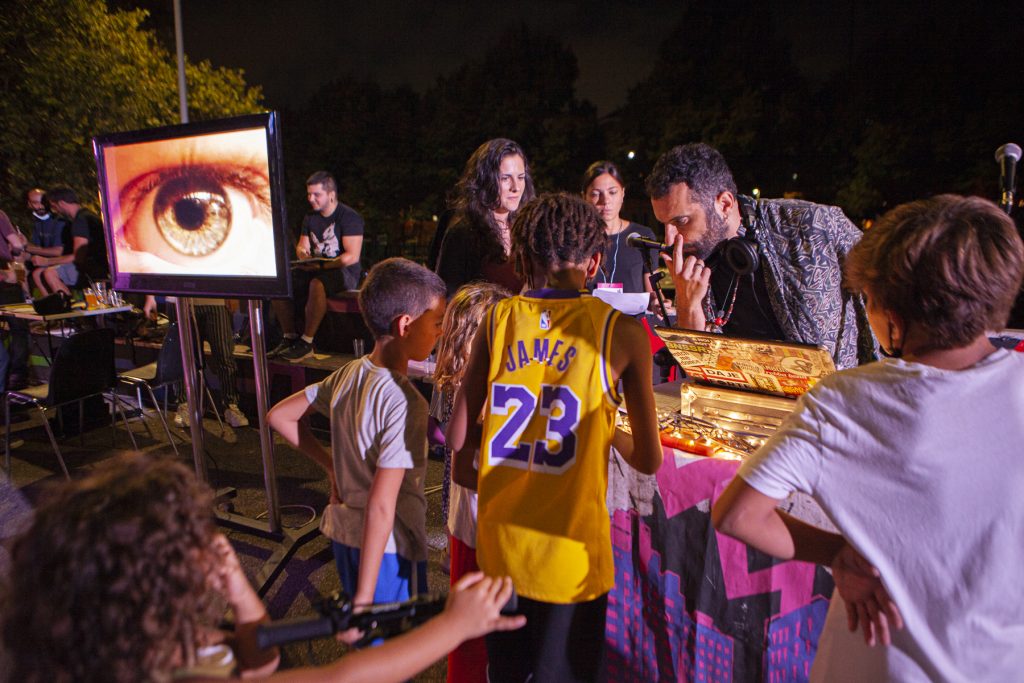 Zakaria Mohamed Ali (Somalia): For me, listening to the radio means imagining and seeing things at the same time.While the radio is broadcasting from the other side of the city, of the country or of the world, you can feel being there. In Mogadishu, I worked as a radio journalist and before I started to work I used to participate as a listener in the programme Muqdisho iyo Maanta, which means “Today and Mogadishu”, on CapitalVoice radio (in Somali codka caasimada). Listeners would tell how they slept in the neighbourhood, and over their morning coffee what was happening. Listening and following, it helps to think without arguing with anyone.

Matteo Polimanti (Italy): RAI Radio 2 … it always manages to make you think about what is happening in the world, but also to make you laugh at the same time … in the pre-covid period, they organized a party where you could finally see the faces of the speakers, there were shows, books launches, concerts … there was a bit of everything … it was very nice.

Nour Zarafi (Tunisia): Radio in Tunisia is regional, frequencies function on a regional basis; my approach to radio is that wherever I am I always listen to it in the morning, just after waking up, coffee and radio. What I remember very well are the voices from Jawhara FM… there are four speakers, with very distinctive voices.

Naiva Mbongobou (Congo): On Radio Congo they talk about culture, there are musical intermissions, political and economic news…I discovered it thanks to my father.

Ornella Maggiulli (Italy): I like Radio RAI Classica, because it makes me discover and understand something more about classical and ancient music, to get involved in what they used to listen to many years ago. I listen to it while I work because it relaxes me.

We invite all of you to share your radio memories with RE.M in the comments section. We’ d love to hear the stories behind them.