TUST ME. ON THE ROPE BETWEEN ARTIST AND AUDIENCE WITH MISTRAL 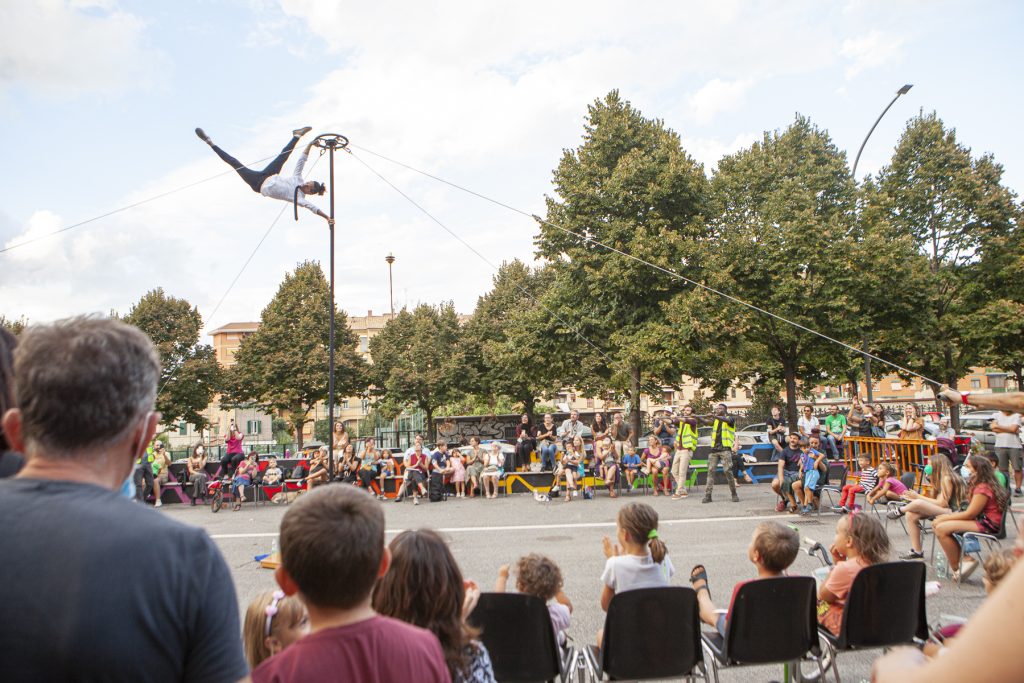 “Have a good evening everyone, and remember, stick together!”

With these words Mauricio Villarroel aka Mistral greets the young audience of Largo Spartaco, after his show “Trust me”.

The applause seems to go on forever, as do the amazed smiles of the children surrounding the Chilean acrobat. Ali, Luca and I, together with five fellow spectators, find ourselves clapping on stage, still wearing safety vests, a few steps behind Mistral, who then steps aside, asking the audience to give a round of applause to his “fantastic volunteers!”. A little embarrassed and a little amused by the situation, we share our little moment of glory.

We take off our vests and everything goes back to normality. Only Mistral stays in the middle of the square, dismantling his pole, on which he has been performing amazing acrobatics. Without us, though – we can truly say it – he would never have made it!

To perform his act, the artist asked all the volunteers to hold each of the four ropes controlling the balance of the pole during the entire performance. Arranged in pairs at the four corners of the square, we all accepted the challenge and didn’t draw back – except when our rope wasn’t sufficiently tense, that’ s when we really had to step back.

Sure, we had to work hard to get that safety bib, undergoing a tough selection process that required us to dance sensual dances and performing more embarrassing acts before the audience. Before he could trust us and put his life in our hands, Mistral had to prove our total lack of seriousness and reliability. Objective achieved, the whole audience witnessing.

The success of a show like that does not depend only on the strength or skill of the volunteers who hold the rope, and therefore on the total technical success of the stunt, but also on the trusting relationship established with the audience in a friendly and light-hearted manner. Right? 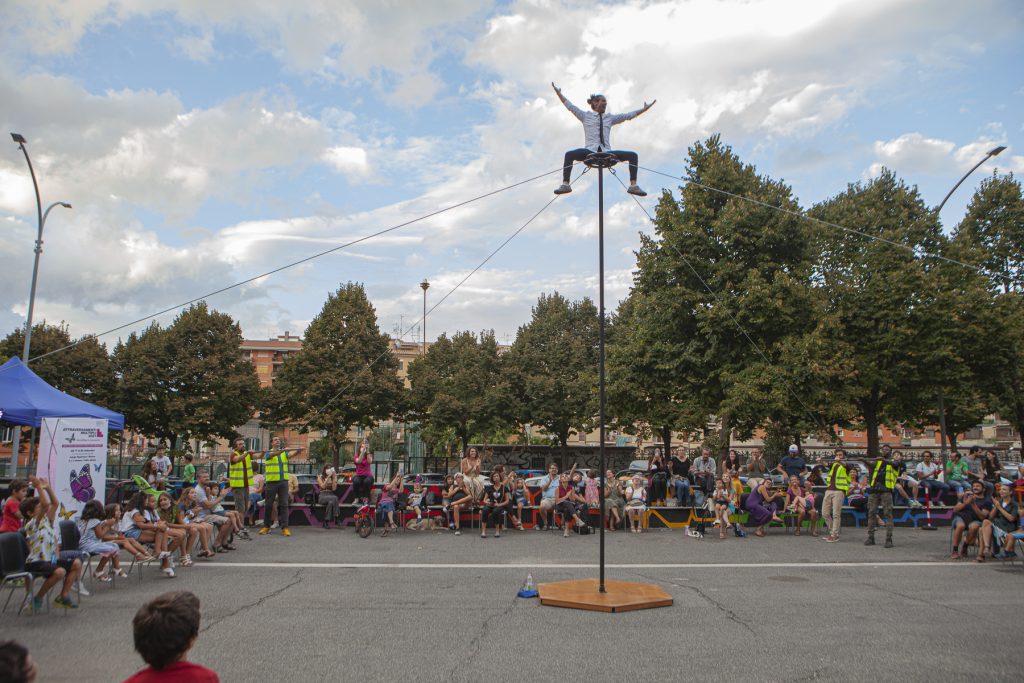 Mistral: Quite right! My idea was to create a show that lacked nothing, and circus tricks alone are not enough. I need all the ingredients to prepare a good, juicy plate that all people enjoy. Over time I have learnt that people enjoy it more when there are so many variations in your show, when not everything is already defined but a lot of dynamics are constantly being reshuffled and brought into play. Many people come up to me after the applause and say: ‘You’re a very strong acrobat, but your real talent is sympathy’. That is a great victory for me. It takes more than technical ability. Such as the nerve to convey all your emotions in the moment to the audience in front of you. All this helps my performance: it gives me determination, stamina and the desire to show the audience my acrobatics. There is trust not only between me and the volunteers, who are responsible for my balance on the pole, but also and above all between me and the audience, who after almost an hour of laughter expect a great circus act. I only like to go up on stage if there has been a very strong sharing of emotions and energy, which may be different from one another, but that is precisely the magic part of it. Nothing is taken for granted.

Prity Naher: How is this pole stunt technique called and why did you choose it?

Mistral: It’s called Chinese pole; when I was trying to create a performance aimed at triggering this interactive mechanism – and since I have been an acrobat all my life – it was the first combination and the first thing I thought of.

Chiara Cecchini: What drives you to raise the stakes so high? 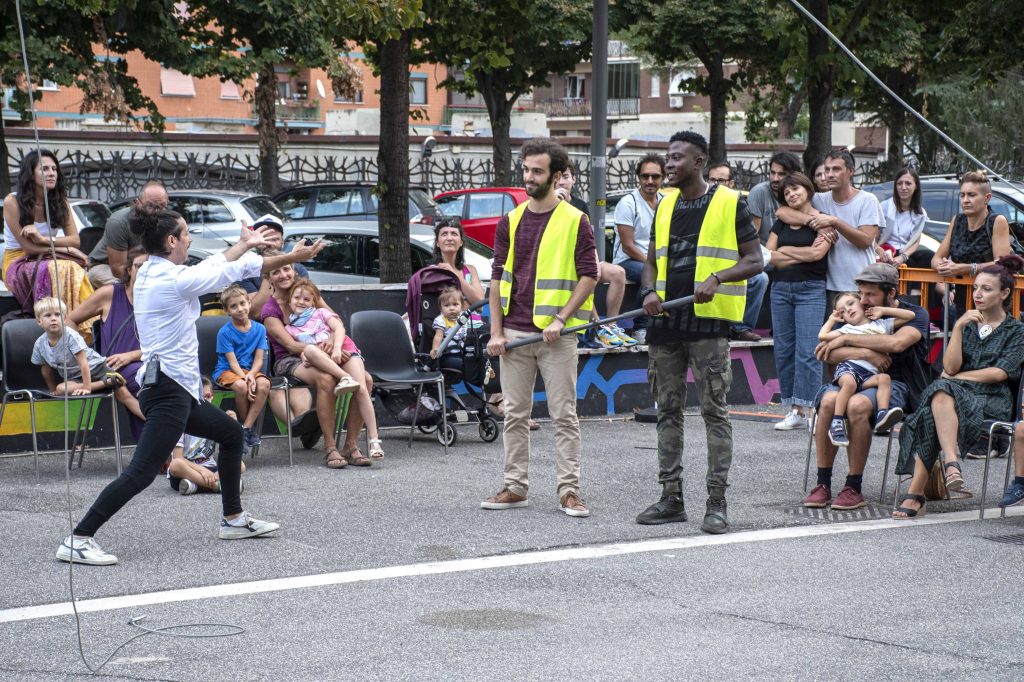 Mistral: Quite simply, audience response. I could have chosen a wider and more stable pole, but I chose a narrow one to accentuate the slope at crucial moments in the show. It’s all about audience response, that’s what motivates me the most and gives me the drive to keep doing this job.

What strikes me about this performance is that people are always more impressed by my standing on the highest point of the pole, with my hands pointing to the sky, than when I do the handstand, upside down, at the same height. Technically there is no comparison: the handstand is thousands of times more difficult. Yet people are more surprised in the first case, because my hands are free, and in case of a fall I would find it much harder to hold on to the pole before impact. Spectators sense it when there is increasing risk and they communicate fear and enthusiasm at the same time. The key is to make them feel both emotions, in a balanced way.

Federica Mezza: How do you choose volunteers to ensure the pole is properly held?

Mistral: When I start the performance, I concentrate and pay attention to the gazes around me. Someone looks more serious, someone smiles at you from the start. Music helps me a lot: someone starts to dance, someone shyly beats the tempo with their feet, others hide in shame. This way I always try to assemble a small group of people different from each other: the exuberant, the shy, the grumpy, the clumsy, the absent minded, and so on. This way I enjoy observing whether and how much each person gets involved. If they were all outgoing and nobody would hold back, it would be less fun, because it would be much harder to create funny situations amongst them. I push everyone a little bit, then the rest happens by itself, and the show changes each time!

Ali Jubran: When have you started performing this show?

Mistral: I first began touring the performance in 2013, and it has been growing quite a lot over time. In the beginning it was nothing more than a simple idea, that of presenting something engaging and interactive in front of the public. Gradually, I have been able to define the meaning of the different parts that make up the performance today, and over the years I have become increasingly aware of the response from the audience, so there is not a single moment I would ever forget about it.

Giorgio Sena: Have you ever had any unpredictable situations?

Mistral: Of course there are always unexpected situations. Sometimes I have had to deal with volunteers who have dropped off the rope to answer their phone while I was at the top performing. I always manage to get away with it, but in these cases it gets a bit complicated. Once I was in Germany and I found myself in a situation where there were no volunteers. It was in a holiday resort where people were all quite elderly. I was wondering what to do. The performance absolutely must go on, so I improvised it altogether, I went to a nearby bar and I gathered all the waiters I could find, choosing them as volunteers. They all really liked it, as thanks to me they were forced to take a break. During the performance I played a lot about their job, which turned out to be a lot of fun.

Mistral: Yes, although for now I mainly work in Italy. I grew up in Iquique, a small town in northern Chile, but I am the great-grandson of Italian migrants. My origins are therefore half Chilean half Italian. I chose my artist name to bring together the two different areas of the world I come from: Mistral is the surname of the famous Chilean Nobel Prize-winning poetess, but is also French for ‘mistral’ wind, a part of my family comes from Rapallo, where the mistral always blows. In short, I’m a half-breed like you, but who isn’t?