Beyond my flesh. A conversation with Carlo Massari

Mash up, a performance by dancer Carlo Massari together with a conversation about the relationship between man and flesh in the United States of America and Mali

Musical interpretation of the performance by Jack Spittle 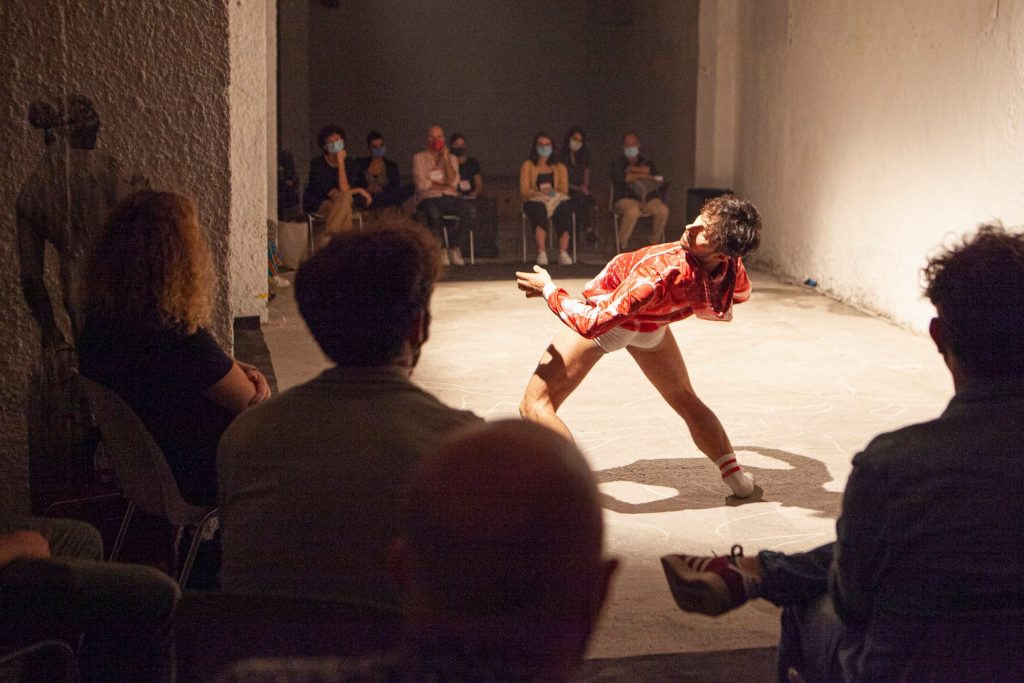 Carlo Massari’s work opens with an explicit reference – initially worded, then increasingly bodily and symbolically – to the issue of industrial meat production in intensive livestock farms, to the suffering of animals in these processes, and to the abnormal consumption of meat in the richest countries, which is one of the main causes of greenhouse gas production and consequently of global warming.

During Massari’s performance we are physically and emotionally drawn into the restless, suffering bodies of living, feeling creatures that are other from ourselves, doomed from birth to slaughter. We are thus compelled to empathise and identify with them, and then, at the end of the performance, to share our thoughts and feelings.Innanzitutto, a fine spettacolo, abbiamo voluto porre alcune domande all’artista e condividere con lui alcune di queste inquietudini.

Jack Spittle: “Carlo, why have you chosen to perform a show containing such straightforward references to the theme, such as appearing on stage dressed as a piece of raw meat?”.

Carlo Massari: ” So far I have pursued an approach to creation that focuses on questioning the audience, making them think about something. As of this year, I decided to shift into a more controversial direction. I realised that, paradoxically, at the moment there is, on the one hand, much more interest on the part of the public to watch these events, but on the other hand there is also a lot of numbness, there is much more need among the public for mere entertainment. So I decided to do something more straightforward and sharp; I make the message simpler, I go for more direct stuff, which is easy to get into, to win the audience over and make them stay with me in this shit for a while. 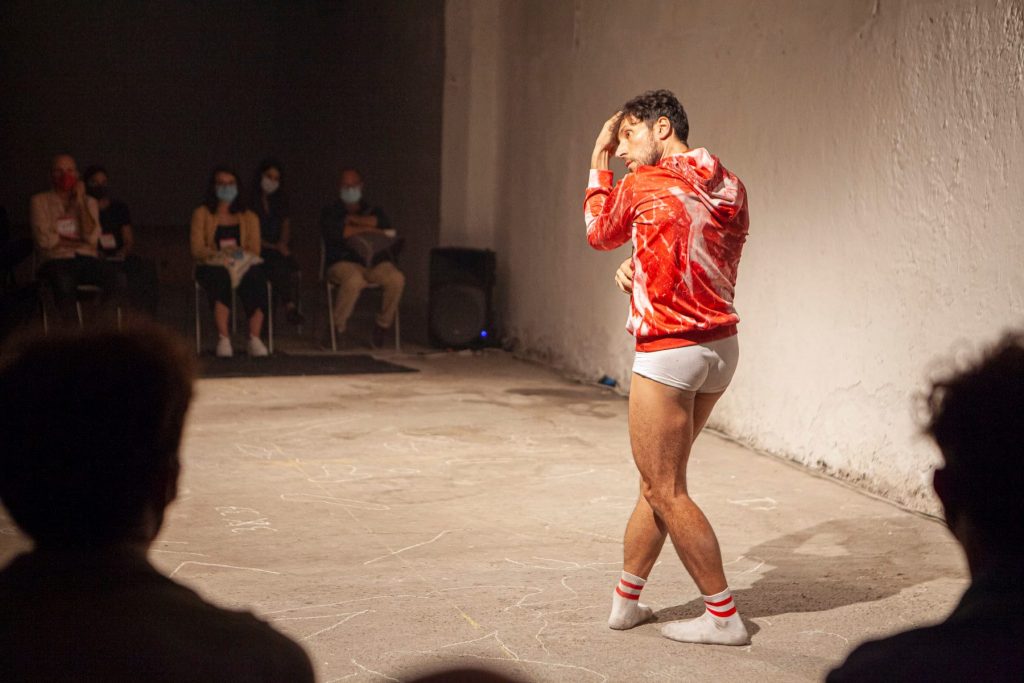 Jack Spittle: “So how did the idea of this performance come about?”

Carlo Massari: “I have just finished a project on the theme of human bestiality. My next project, which starts from this mash up, will focus on the themes of Metamorphosis and Rebirth, not necessarily intended as something bucolic and reassuring, rather as a process that can also be extremely painful. This performance is meant as a preparation to address this theme; we talk about rebirth, but if the system around this rebirth doesn’t change, it won’t be a rebirth, it will just be a repetition of what we have already done wrong in the past, i.e. intensive farming with all that it implies”.

Mahamadou Kara: “What are the emotions you would like to induce in the audience? How do you feel from an emotional point of view when performing?”.

Carlo Massari: “For me, it is precisely an experience of physical metamorphosis, which is also part of the artist’s process itself, knowing how to generate metamorphosis, or else we would just be ourselves. Metamorphosis is also a transition I make the audience go through, that is, I try to induce the audience to experience Metamorphosis, which is exactly what the provocation is about. It’ s not just to make one think about something, it is also about making this something stick in one’ s mind somehow, in one’ s body or in one’ s subconscious, like a seed that will eventually blossom. Probably 0.1% of the spectators watching tonight will have started to think about intensive livestock farming, however, when they will hear about it, they might think about it for a moment”. 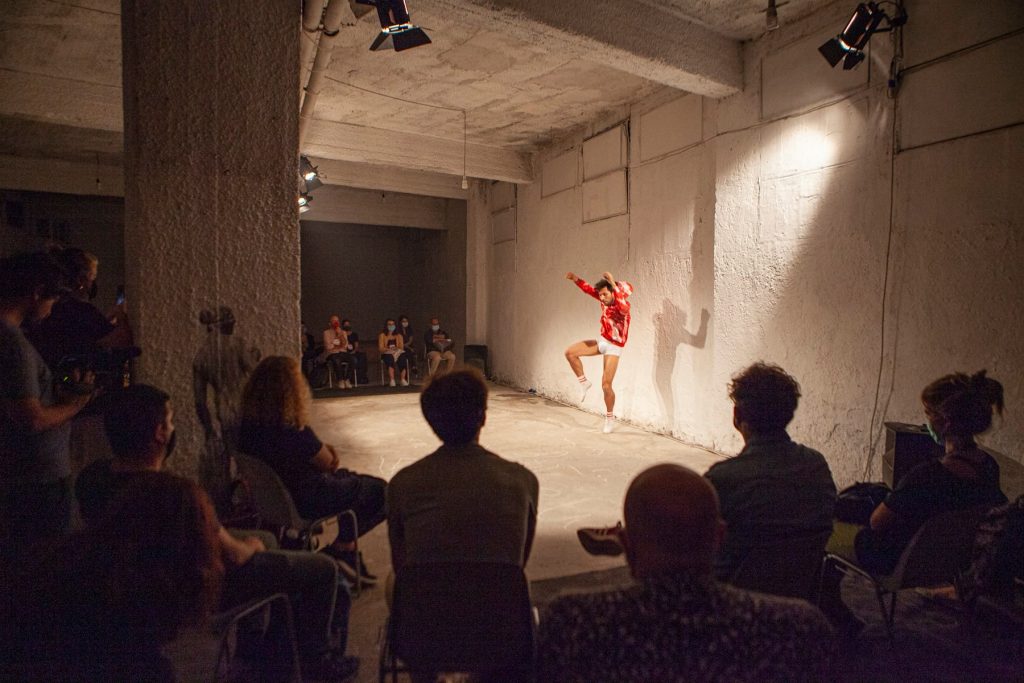 Mahamdou Kara: “Carlo, are you a vegetarian?”.

Carlo Massari: I have in fact become a vegetarian, although I don’t call myself one. I experienced a change in me, due to my interest in the topic. I watched a show that sparked my attention on the subject of intensive livestock farming and it stirred me up, generating a chain reaction in me which led to my decision to no longer eat meat. Something I often ponder about is that nowadays we see a piece of meat as an inert thing, with no form, forgetting that it once was part of an animal, and we no longer think of the animal as it was, we cannot visualise it. This fact was brought out for me a few years ago when I witnessed a car accident. It was a terrible thing, I saw pieces of human flesh on the ground. At first I just felt nausea and rejection, but then I stared at these pieces of human flesh, and eventually this vision of flesh, which we all have in common as living beings, was impressed on me and has not left me since.

Then, having said goodbye to Carlo, we continued talking among ourselves.

Mahamdou Kara: ” This reminds me of my relationship with animals and meat when I was in Mali. I grew up with cows. I have to say that since I arrived in Europe, I have never again tasted the real taste of meat to which I was accustomed from birth. Here we put the meat in the fridge, we buy it at the supermarket. It’s all frozen, you cut the meat and you don’t find the blood. Well, you can also buy fresh meat at the butcher’s, it may be a matter of price, buying frozen meat. But when I cook it, I can’ t really appreciate its taste. 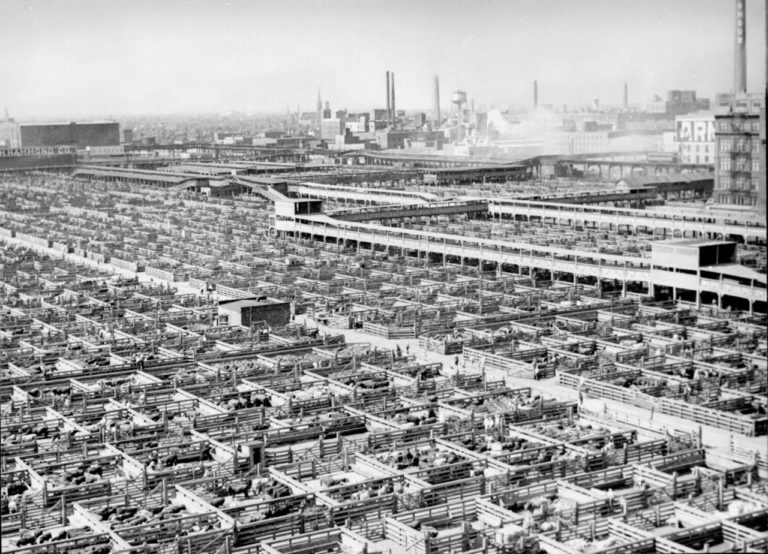 Jack Spittle: “Kara, you grew up with cows, you could see them being born. I was born in Chicago, where the cow dies, it becomes a commodity.  Chicago in the nineteenth century was the central hub of the American railroad, plus it was surrounded by millions of acres of plains. So once the freezer train was introduced, the city turned into the hub of meat production. In 1865 the Union Stock Yards opened, a huge urban slaughterhouse implementing industrial techniques in the meat processing industry, such as the (dis)assembly line. Farmers sent animals to the city where they were killed, slaughtered, loaded onto trains and sent all over the country, and as far away as England. There would be so much to say about this slaughterhouse, the pollution, the exploitation of migrant workers, the trade union struggles, but I will just give you this number, after only a few years in Chicago they were slaughtering about 15 million animals a year.  Can you imagine that? Look at this picture from that era of the Stocks, it’s scary to look at.”

Mahamadou Kara: ‘Yes, it’s very upsetting. However, now that you mention the railway, you remind me of something that makes me laugh when I think about it now. During the show, Carlo makes a gesture, there is a part in which he sees a baby calf being born, all trembling, and I remembered that as children in Kita – my home town in Mali – when the train went by at night we prayed that at that moment  the bérbere would cross the railway with his cows, because when the light hits its eyes the cow gets frightened and stops on the tracks, but the bérbere doesn’t have time to chase them all away.  So, we hoped that the train would run over one or two cows so that we would go there, cut their legs off and take them home to eat. 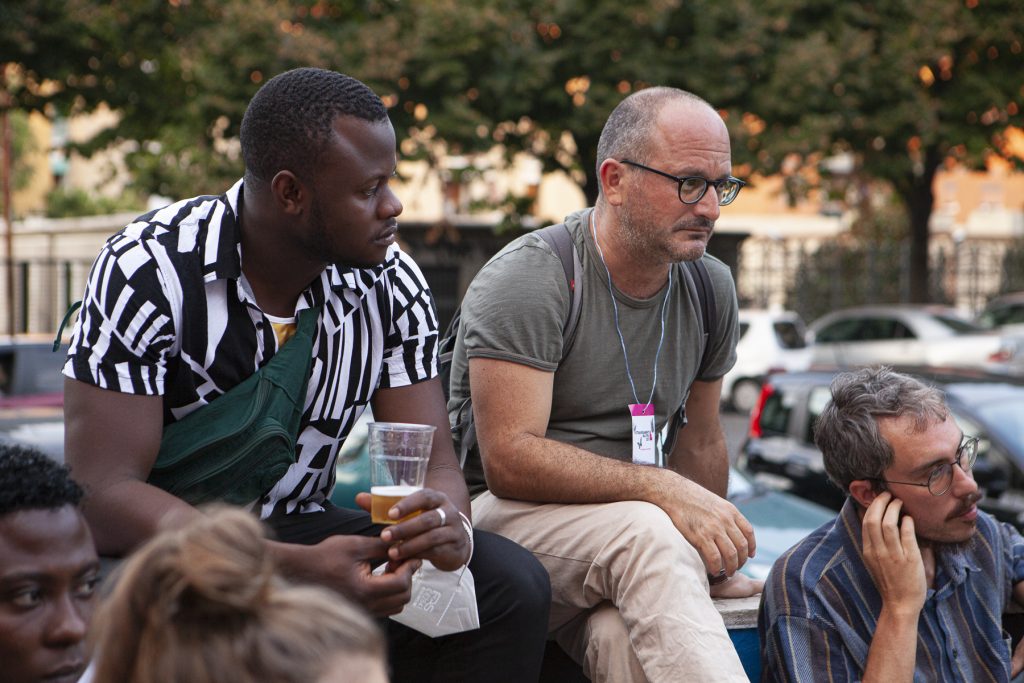 In my country, when a cow dies like this, the elders don’t eat the meat, because they say it is not Halal (“pure”, ed). For a cow to be Halal, you have to kill it by first saying Bismillah (in the name of Allah), and if it is not, only children eat that meat”.

Jack Spittle: ” I find this Halal thing you say funny, because it is so far from my experience. For us just to see a cow or a sheep was a crazy thing. When we visited my grandparents in England – they lived in the country – there were lots of sheep and when we saw them my sister and I would hang out the windows and point and shout ‘SHEEP! SHEEP! SHEEP!” In Chicago the only meat we would see was the kind described by Carlo: not even a dead or inert thing, just something already cut into perfect pieces and packed in plastic. Entrails can only be bought in a few ‘ethnic’ butcher’s shops, Mexican, Polish or Chinese. Back home it’s all steak and burgers, which hardly makes us think that meat comes from a living being.