An evening at the theatre: «Ether/After» edition

Ether/After: Love and existentialism in the time of COVID

by Charlotte Smit for Medeber Teatro
This week, Medeber Teatro is taking over the Spectatorship blog to share with you all its experience in the Migrant Spectators project. As part of this initiative, we went to the theatre in Brussels with editorial teams for two different shows. Today, we are sharing some bits and thoughts about Ether/After by [e]utopia/Armel Roussel. 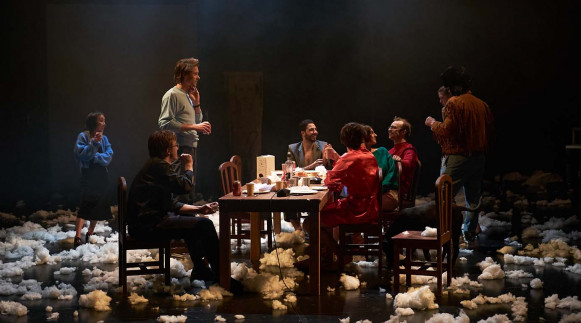 The plot of the play is that of a theatre group left to its own devices in an abandoned theatre after the unexpected disappearance of their director. Lacking reference points, helpless in the face of an unprecedented situation that leaves them perplexed, the actors wonder about the great themes of life, the state of society, and democracy.

Although the crisis we are currently living is not mentioned in the show, it is inextricably impregnated with it. Originally scheduled for 2021 and then rescheduled, as was the fate of many other theatrical works, the play deals with the isolation and questioning that has arisen during this peculiar period. The lack of a fourth wall to connect with the audience and fill the void of being together highlights the author’s need to share that might have arisen due to that feeling of isolation and unknown. 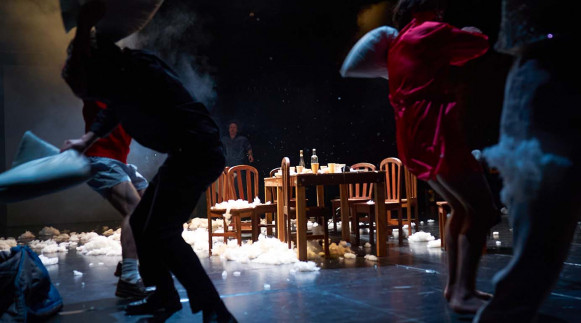 The author drew on the experience and questioning of his own actors to fuel his work, explaining that for him, fiction resides more outside of the theatre than on a stage. When reality meets fiction – as it often does -, it is difficult to know when the narrative begins and ends.

Lara and Nathalie are part of the editorial team that attended the show at the Théâtre Les Tanneurs in Brussels. During one of the subsequent workshops, they shared their feelings about the play and the themes conveyed in parallel with their own questioning.

Nathalie – The arrival in an open scene greeted by the actors and the natural presence of a naked man on the stage challenged me. I expected them to invite me to drink coffee at their table. Then I got a little lost in the explanations and too many words…

When asked whether sexuality could be a political question, Lara shared some of her thoughts:

Lara – Sexuality can be a politicized issue (exploited by politicians in one way or the other to avoid talking about real problems like wages or precariousness). Very personally for me, sexuality remains a very intimate issue: I’m not interested in other people’s sexuality (their sexual orientation, their choice to be sexy or not to be sexy). We should all, in an ideal world, have a free sexuality and be able to live it as we want, but I’m not a fan of making it a public/political issue. For women the question arises more often (the way they dress sometimes justifies a rape for the public opinion, too sexy, not sexy enough…) and that’s precisely what bothers me. Something that makes me hallucinate. In theatre, and especially for modern shows, I never understood the added value or the meaning of the choice to have the actors recite in the nude. In Ether/After, I can’t understand the significance or deep symbolism of the two nude scenes. 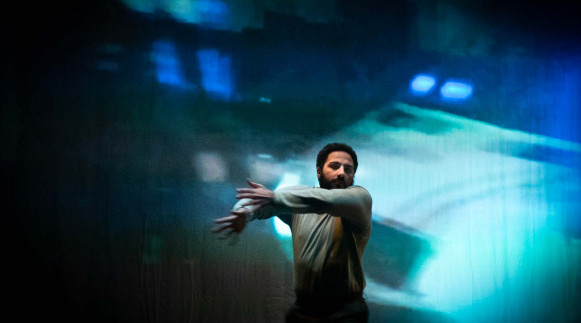 Natalie – Their situation of the characters abandoned by their “metteur en scène” echoes with our own situation not only with regard to politics but also with regard to our faith in general. This abandonment and sense of emptiness “somehow” justifies the chaotic succession of their presence on stage. Isn’t their chaos a reflection of our current chaos? From doubts to the search for love and art as an instrument of freedom, to the rage that makes each of us a potential murderer.

Beautiful dance scene of Habib in front of the video: where the horror of a demonstration is contrasted with his body in the centre of the scene which seems to shout that there is another way forward… And the authentic words of the Japanese actress responding to the excesses albeit justified of the other female actress. Also beautiful is her way of teaching the naked “Western” man to walk, that only with her and body movement – a new language? – he finds a way.

The show certainly pushes us to ask questions and the disorder of the scenes resembles the disorder of our society. The revolt against the drifts of the police and the struggle against a lack of “justice” that threatens to become even more violent. 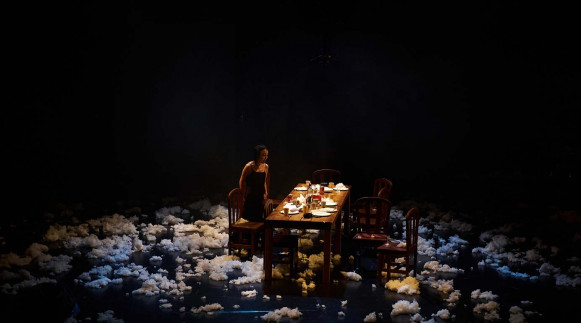 I was struck by the “community” moments of dance and mimicry with gestures and these poetic attempts to struggle together with the body in order to orient ourselves and seek a balance, an understanding, a new form of encounter, a more luminous goal.

Can the theatre be synonymous with a place of citizenship?

Lara – Surely the theatre can, if it is a popular theatre (as opposed to elitist). Often in the theatre we see very beautiful things but we often feel ill-equipped to understand certain things. This type of language is not taught in schools, but I find it an excellent opportunity to develop emotional, physical, intellectual and imaginative skills. With simple role-playing you can explain very powerful concepts for example. So yes, theatre is the place of citizenship – if you think about the ancient Greeks and Romanians, theatre had a leading role in educating people at all levels of culture.