An evening at the theatre: «Dimanche» edition

Dimanche: turn off the lights so I can’t see

by Charlotte Smit for Medeber Teatro

Last week, Medeber Teatro shared a look into its experience in the Migrant Spectators initiative. As part of this project, we went to the theatre in Brussels with editorial teams for two different shows. This time, we are talking about the play Dimanche by Focus / Chaliwaté which we had the opportunity to see at the Théâtre Les Tanneurs back in October. 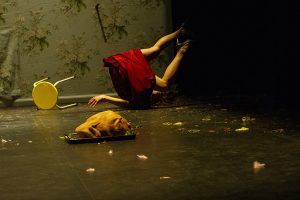 Our article of last week evoked the blurred frontiers between reality and fiction, the uncertainty of the real imbued with the imaginary – and vice versa. At first glance, Dimanche definitely seems to belong more to the world of the dreamlike, so much the absurd takes precedence over the sensible. However, it does depict a very familiar reality: the one we are currently living in. Dimanche – which means «Sunday» in French – tells in part the story of a common Sunday in an ordinary family set in a house plagued by natural disasters, ready to collapse on them from one moment to the next. The family members use all sorts of stratagems to maintain their daily lives and to try to escape the inevitable change that is happening around them. 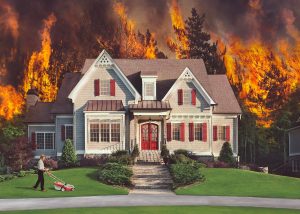 Theatre companies Focus and Chaliwaté have joined forces to tell the all too current story of climate change using a multidisciplinary, handcrafted theater that combines puppets, videos and various objects. The play illustrates human absurdity and its attachment to material forms in the face of a situation that simultaneously is bigger than them and concerns them entirely. The precious blinders of human individualism take many forms to resist the inevitable impermanence of things, in a society fixated on material conditions as indicators of happiness, the perpetual race towards success and possessions cannot be stopped – not even by a house on fire.

With relevance to the current crisis the world is facing, a question we asked the editorial team who attended the show was: What advice would you give to your younger self?. The members took the time to reflect on their childhood, comparing the societal context they spent their formative years in to the one this new generation is growing up in, faced with unprecedented challenges. A generation of children asking questions their parents are sometimes not ready to answer or even to hear. Gaia and Giovanni both took the time to reflect and to record their answer. Below is a summary of their reflection.

Gaia – I would tell my younger self to love my toys and treat them with a lot of care. I wasn’t never good with it, I would break them or lose them instead of cherishing them. I would make sure to have a place to store them and if I were in need of a new one, to invent it instead of buying it. To start caring when you’re a kid for what you have can be a good start to learn to avoid overbuying and overaccumulating.

Giovanni – If I met these younger versions of myself, I would tell him classic stuff, like advise him to start recycling from a very young age and to do it properly, to turn off the lights, etc. To learn to tolerate heat and cold more in order to use AC and heater less to spare energy. To eat less meat. Even though he wants to, one day he’ll understand. Do more sport like hiking, be more in nature. To understand what we might lose. I would tell him to talk from an early age about the climate crisis. Raise awareness, try to change mentalities of people around, like family and friends. To study a lot. Subjects that might have an impact in regards to climate change. That might contribute positively.