Overlooking Largo Spartaco. Overview and visions of a square

The last Saturday of the festival seen from a balcony of the Boomerang and from the square, a glance at Collettivo Cinetico’s and Salvo Lombardo|Chiasma’s performances. 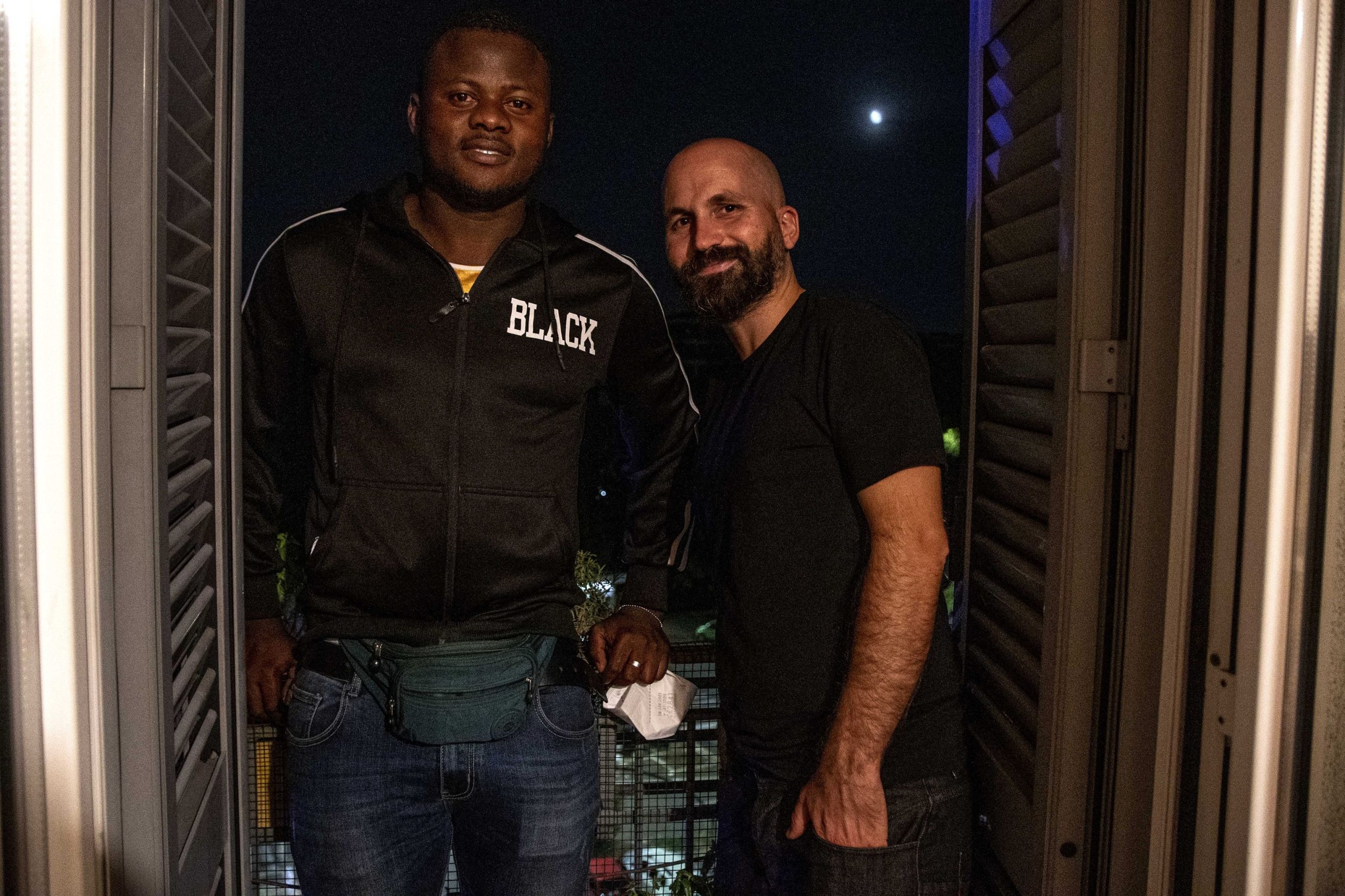 Luca: We have been attending Attraversamenti Multipli in Largo Spartaco for four years now, every September, but this is the first time we have managed to sneak through one of the doorways hiding behind the square from the bustle of spectators and artists. In fact, one has to turn at the back of the Boomerang, a long V-shaped building bordering Largo Spartaco, to find the stairways leading up to the residents houses, who over the last four years have often looked out onto the square to participate from their balconies or windows in what was going on in front of them. Back there, passing alongside GarageZero, Umberto Tati welcomed Mahamadou Kara Traore and me, before opening the door to a narrow lift up to the top floor. Umberto is one of the friendly legacies from the festival and one of the photographers who has most closely accompanied us in discovering what has gradually become our own place, a place where we have begun to be familiar with people.

His wife Claudia is at home too. We sit there holding a cup of coffee, it is now night, the balcony doors open onto the square. For the first time I hear the Festival sounds from above, from afar I can hear the echo, that indistinct sound of applause, music, chatter. Up until five minutes ago I too was part of that sound, but now in silence I watch Claudia as she finishes cleaning the stove while Mahamadou Kara asks her the questions we and the others from RE.M prepared before going upstairs.

Mahamadou Kara: How has the life of the square changed with and during the festival?

Claudia: You can feel it yourself, even if you’re at home you’re never alone! If one evening you don’t go down there, it’s like you’re there, the square is virtually inside my house, it’s part of our building.

Mahamadou Kara: Which kind of connection is there between the square and the Boomerang? 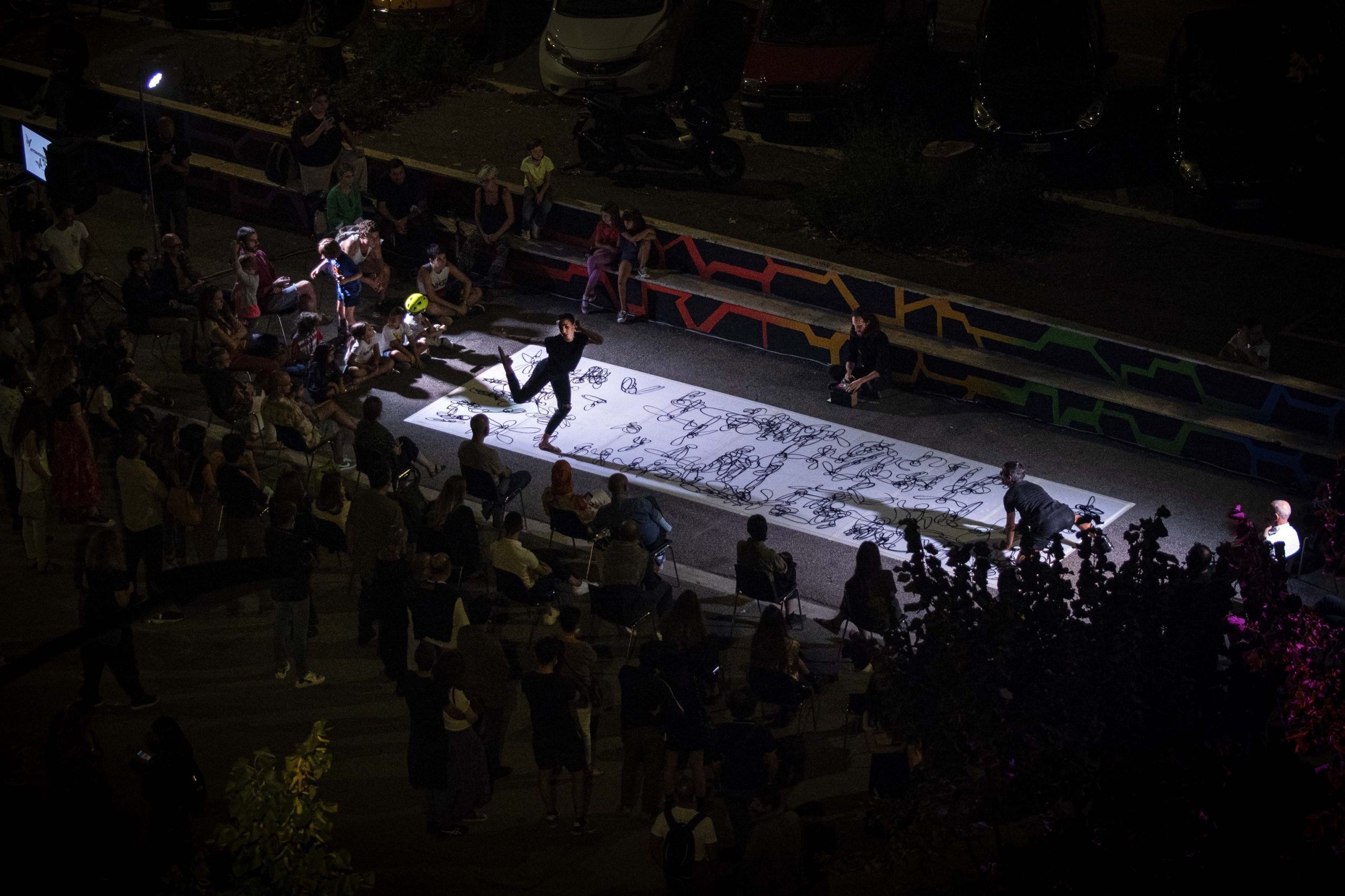 Claudia: This square hasn’t always been there. Earlier it was a big car park (images of the early Largo Spartaco can be found in the frames of two masterpieces, Mamma Roma by Pasolini and Un borghese piccolo piccolo by Monicelli, editor’s note).  We’ve lived here since 1990, but not everyone was happy when the square was renovated. In fact, at the beginning, only scoundrels with their car radios playing loudly would gather down here, and at night we had to put up with all those neo-melodic songs and major drug dealing. People grew tired of it, and eventually the square’s life was positively polarised by the activities of the Csoa Spartaco and the opening of the Sottosopra brewery, previously a wine shop, with which, after a somewhat complex first phase, families from the building became friends. Over the years they have organised many events, established links with Largo Spartaco and built up a network.  Now children play there until late. This process has been accompanied by the simultaneous appearance and running of the festival, and people keep coming throughout the year, so it is now a popular hang-out spot.

Luca: As Claudia leaves the kitchen, I look out from the balcony. There it is, the square. There it is, the festival. From here, tonight, I can really see them both as a whole. On this horizon, Collettivo Cinetico’s dance is part of the same visual composition of two children playing football with their father, of a boy with a glow-in-the-dark helmet tripping over his mother’s feet, of three boys eating a pizza on a bench and groups of people on the wall drinking and talking, of a waiter picking up empty glasses from a table, of a car making a U-turn while a performer is drawing curves on the white carpet laid out on the ground for the performance’s live graphics. An aeroplane passes overhead, very close, the window next to the balcony lights up, it’s Claudia; the sound of her moving around plays as an interlude between the sounds of the beer glasses, the sound carpet of the live DJ Angelo Pedroni and the child running at breakneck speed while a guy leaves Largo Spartaco and goes, who knows where, with a resolute stride. A strong smell of basil, rising from the pots on the balcony is part of this holistic vision; who knows if Francesca Pennini and Margherita Elliot can imagine it in their O+< vicious writings on the unstoppability of time, while captured by Umberto’s camera, who knows if they too are perceiving this unstoppability of space. Another shot, a car door closing, then music, two motorbikes roaring and the audience applauding. Collettivo Cinetico’s performance in Largo Spartaco has just ended.

Down in the square. 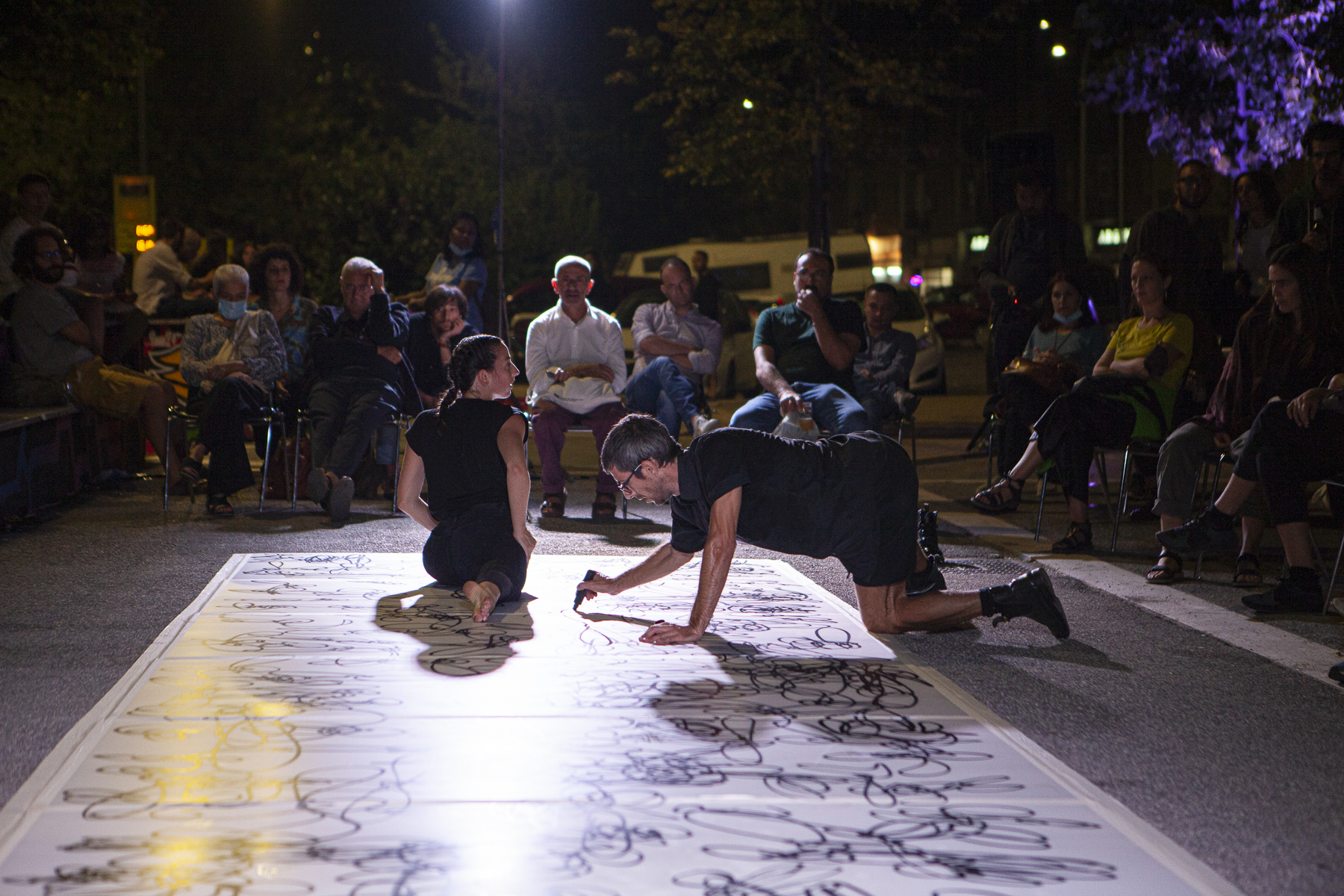 Aurora: While the editorial staff’s Whatsapp chat is sending us photos of Luca and Mahamadou Kara looking out from one of the balconies above us, Pubblico in site specific La sedia vuota aspetta il prossimo (Public in site specific The empty chair awaits the next one), a creation by Giovanna Velardi and Paolo Roberto D’Alia, national premiere at the Attraversamenti Multipli festival, has just come to an end, and the last event of the evening, Let My Body Be! conceived by Salvo Lombardo|Chiasma, is starting. This performance is less of a show to watch and more of an action to participate in. A few minutes before the start of the performance, the spectator-actors are given headphones through which the artist communicates with them, instructing them to perform simple body gestures. Initially, the actions appear autonomous and unconnected, like the people who perform them, but then, fluidly and almost inadvertently, they merge into one big choral action, as if we were in the middle of any square in the world. Bodies and their movement are the core aspect of the performance, which focuses not only on movement as such, but on movement as self-affirmation and, above all, as a social self-affirmation. Walking thus becomes a verb that conceals many others: to be, to discover, to affirm, to assert. It becomes an unexpectedly political gesture: I walk, I repossess an urban space, I connect to an almost infinite network of events, places and people and, above all, I participate. I am reminded of Jack’s words when, before Luca and Mahamadou Kara went up to Umberto’s house, we were wondering what it meant to live on a square.

Jack: There are no squares where I come from, in Chicago; and squares were one of the urbanistic features that fascinated me most about Italy. Mahamadou Kara: In Mali we have a place where we meet, but it is very different from the Italian piazza. There is not a square everywhere you go. When we were kids we used to go and play in this meeting place and in the evening our mothers would come to look for us. From the age of sixteen you don’t go there any more, it’s only for children or old people.

I believe squares are important spaces for children, because everything starts there, beyond school or kindergarten. Children in a square know their neighbours, people from their neighbourhood. It is a landmark, where there is no address, no house number, no door to enter… it is public, so everyone has the right to be there”. 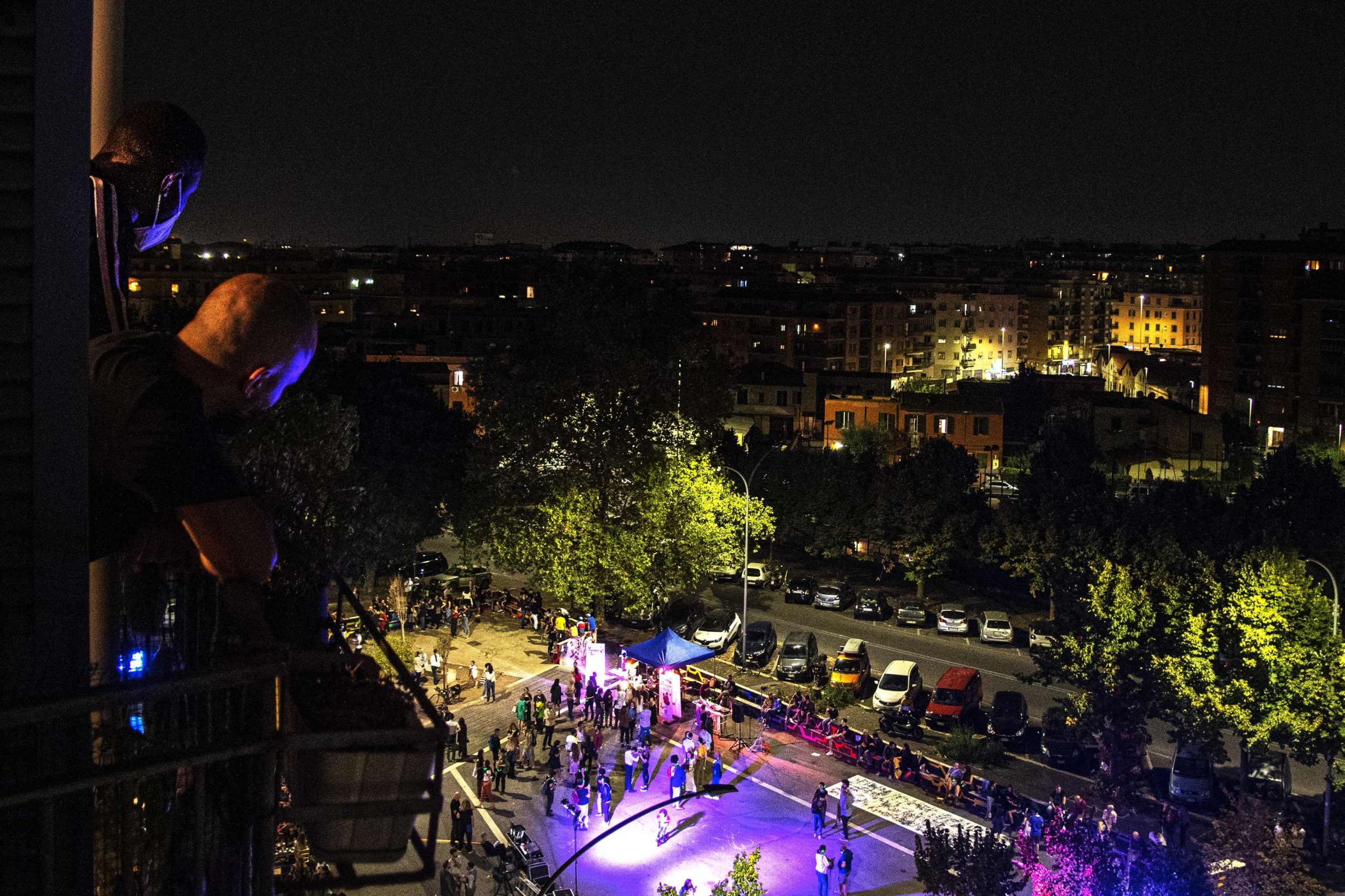 Mahamadou Kara: How has the Festival been received?

Claudia: At the beginning, we were not so used to it. In the square, the only event we had was the Boomerang fest, organised every year by the Spartaco Social Centre. The advent of Attraversamenti Multipli was something very special, it was received enthusiastically, and lots of people attended. A lot of people also attend from neighbouring areas, such as Appio Claudio and San Policarpo.

Mahamadou Kara: So the festival has managed to become part of the square and the building life?

Claudia: I think so, even though many people only participate from their windows. Those who come down are more or less always the same ones, as the building is home to many elderly people.  However, as I said, even older people participate in their own way. The “noisy” square is welcomed by the inhabitants because it is also beneficial, it keeps people company; if you go out at night and come back late, you are sure to find people here just as well, so you don’t have to worry about about coming back home.

Luca: Is there an image from Attraversamenti Multipli as you watched it from the balcony that particularly struck you?

Claudia: The performance I saw on Sunday of the tightrope walker, Mistral (here, Trust me. On the rope between artist and audience with Mistral). I only saw the last bit and I was terrified, at one point I saw this performer standing on a very high pole, and I imagined what he could see from above, below me. It was interesting, I think the kids went crazy seeing something like that. At first, I was working sitting at my table and all I could hear was his voice talking, but then something intrigued me, and I looked out and saw him walking up on the pole. So I kept watching him from the balcony.

Down in the square.

Aurora: You can understand a lot – perhaps everything – about a city from its squares and their ‘multiple crossings’. Whether we are alone or in a group, distracted or listening, the square allows us to get to know and interact with what is around us, as well as to understand its specific qualities and needs. It seems therefore that we need to mobilise our bodies towards a common living space, to claim a public space where the community can be preserved and renewed. A public space in which we can shout “let my body be!”.