An evening at the theatre:
«Reality» edition

Reality: transfiguration of the common place

by Charlotte Smit for Medeber Teatro

Medeber Teatro went once again to the theatre with a top-notch team of editorialists to watch the play Reality by Daria Deflorian and Antonio Tagliarini at Théâtre Les Tanneurs in Brussels. An initiative part of the Migrant Spectators project, notably aiming to help adult migrants appropriate public spaces in an effort of social inclusion.

From an extraordinary story, that of the notebooks of Janina Turek, a housewife who for more than half a century described with sharp precision her ordinary daily life with a pen and small notebooks, comes the vision of the artists Daria Deflorian and Antonio Tagliarini who imagined, interpreted, assumed, created a life parallel to the one meticulously written down by the Polish housewife. A work that puts the imaginary at its core centre, even though it stages the life of a real life person. For Janina’s “factography” echoes the reading of a recipe, with data such as ingredients, quantities, sequences, times, a parallel with her writings, where over thousands of pages she has precisely transcribed at a daily rhythm her smallest facts and gestures, the number of meals, hugs, shaken hands, meetings, outings. Facts dated, classified, digitized, signed, with the precision of an expert accountant. But what do we know about this woman beyond meticulously transcribed quantitative data? With Reality, the audience is witnessing the reality of a life, one imagined by its authors who questioned Janina’s existence and life itself. 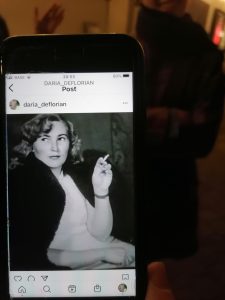 It was after her husband’s arrest and imprisonment in Auschwitz that Janina began writing her life work. Unbeknownst to everyone around her, she kept writing everyday, even after her husband’s return. Notebooks that were found post-mortem by her children in an old box, now similar to an artefact locked in a museum behind a glass window, transparent, accessible to all. The discovery of these notes has led to a fascination that persists to this day, an anecdote about the ordinary daily life of a woman about whom very little is known for someone famous for having written about her own existence for decades. A life counted down, a ticking clock in the form of scrambled annotations, each annotated meal bringing Janina closer to an uncertain but inevitable end. A finite number of meals, gestures, hellos, goodbyes, hugs, encounters, movies, before the end of one’s journey on earth. In Janina’s notes, these numbers feel like a countdown set up on paper with a fountain pen. An accumulation of trivial facts which in the end, after 748 notebooks, amount to a whole life; the counting of a life span with the calibration of notebooks as a unit of measurement instead of years. 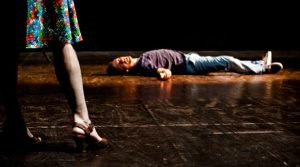 Reality refers to our own mortality and the beauty of the every day. A life told in the form of an accounting journal seen through a magnifying glass, made up of small everyday gestures, the kind done mechanically, the kind we would not even remember or be unable to count correctly if asked to. It brings forward questions about our relationship to the meaning of life. By what are we defined? By the content of our lives, by the relative importance of our actions and accomplishments? By our values? What is important to us? In the end, what matters most? 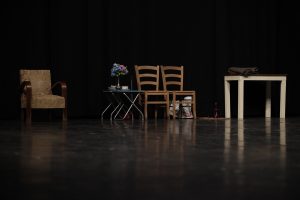 Members of the editorial team Nathalie and Denise both shared their thoughts and some insight about the play.

Nathalie – I was immediately involved in Reality. The game between reality and fiction starting from a death sequence, and on the credibility or not of the scene of a heart attack played by both actors, (which) then (…) causes laughter, a way perhaps for us to exorcise death? The question arises when did Janina’s death begin? Are these notebooks not the testimony of her impossibility to live? Her prison.

And the actors ask. When, where and why did Janina start writing this diary? In the absence of life, she writes everything she does, is it not to prove herself that she lives? Her husband disappears and she dies but is still there…. So what does she do? She writes… 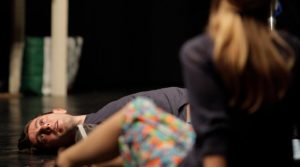 There is a lightness that allows us to penetrate into the almost surrealist and “commercial” reality of this incredible History of diaries / notebooks of lists of facts and objects of “reality” but devoid of any emotion.

Frightening in its cold analysis but what an incredible opportunity for a creator, or two actors in the “part” like Florian and Daria! And it is they, their “falsehoods” that bring Janina back to life. Their fascination with her. They give the objects described by Janina a power to absorb and recall Janina’s emotions. And her malaise becomes ours thanks to the new theatrical reality they create.

Where is the reality?

Light and deep, thank you for this choreography of the everyday. 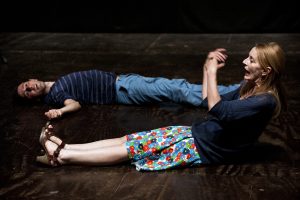 Denise – Janina accumulated facts, such was her rigor, 700 notebooks preserved and written with almost unthinkable precision, today kept in a museum in Krakow, considered not too normal at the time. Everyone should have a Jamina in them, but now there are smartphones! Today it is almost impossible to have this rigor, just now, leaving the theater, I just saw 50 people and a quick Good evening, and still a thousand noises and smells.

So rigorous that she locked herself in her story, perhaps because it is impossible to live everything, to feel everything and to transcribe everything with such precision.

The fact that as we age, what was taken for granted becomes a rarity and an impossibility, made me think and left a veil of sadness mixed with a desire to improve this state.

I am enchanted, delighted and changed by this play, which shows how strange and bizarre our world is.

She closed her 1945 diary, the date of the end of the war, with a diagonal.

Sources:
• La Libre
• Opera Teatro
• People Pill
• Philip Watts: “Transfiguration of the common place”: as described in Philip Watts’ 2016 book about philosopher and cinema connoisseur Roland Barthes, this expression was coined by Arthur Danto and is described as “a process in which the ordinary elements of the cinematic apparatus become extraordinary, and thus worthy of the viewer’s attention”.