We asked Antonio Rezza to tell us about the shows on Saturday 18 September 2021 at Attraversamenti Multipli, reading Bambara’s language.

Indeed, I am beginning to say this too often, because later on, with Kara, we started this peculiar path of vision that is now called Redazioni Meticce and is now the subject of a European research with the Literacy Act project. When we met, we had both just arrived in the shelter in Tor Bella Monaca, Kara from Kita, Mali, and I from Via Tiburtina.
I’m not sure why, but one of the languages that teachers of Italian for asylum seekers like to ‘learn’ the least is Bambara. Probably because, as Raffaele Urselli explains below, it is one of the most spoken and understood languages in the Mandingo group area from Ivory Coast to Burkina Faso, passing through Mali and Senegal, all countries of origin of those who arrive in Italy. 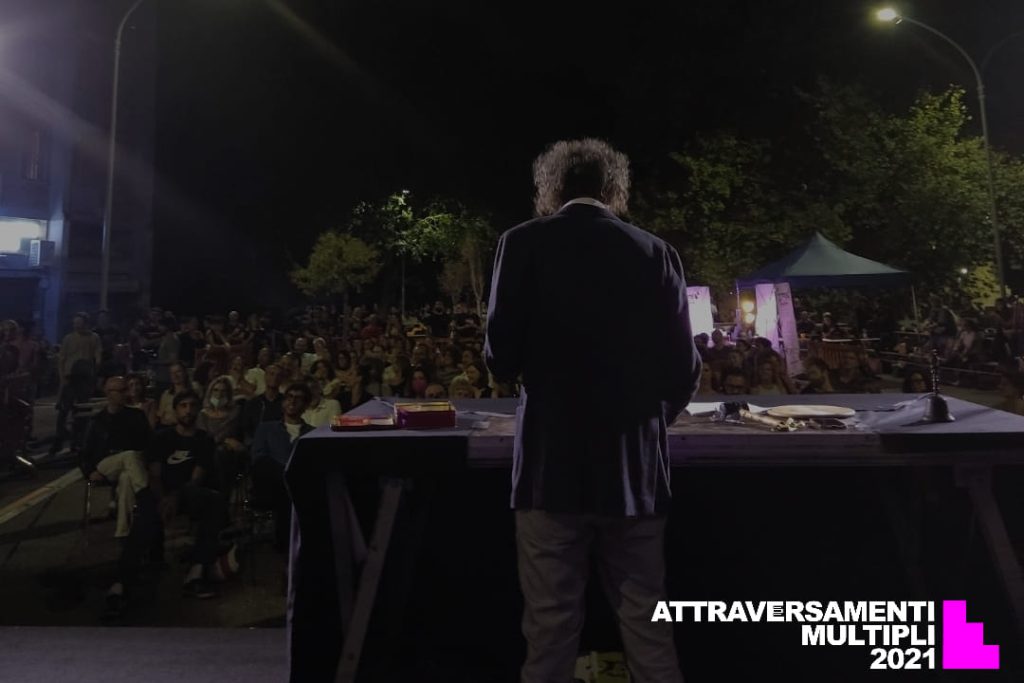 Today, almost five years after its arrival, the Malian and Bambarophone ( I venture a lexical liberty) community in Rome is much larger and, as Kara tells me, beginning to be more organised.

The lack of dissemination of a language as an acknowledged language in one’s own country’s educational institutions (here, a valuable story by Kara on the subject), on online information channels, in forums, fully taking into account the spelling and evolution of vocabulary, makes a community of speakers more vulnerable, more susceptible to misinformation, more detached from their roots and brings the language to the threshold of survival.

So, this year we continue to challenge the Festival’s artists, by using words from other languages, whose roots are both far away and contemporary, yet coexisting with our own. So we find ourselves having Antonio Rezza speak in bambara, to listen to today’s festival programme (here the detailed programme) before seeing him perform Asta al buio within the Attraversamenti Multipli Festival.

A few days ago, Jack Spittle, a member of our Mestizo Editorial staff, wrote me some lines from John Keats’ “The Fall of Hyperion”. With them, we open 2021’s Language Trespasses:

Who alive can say
“thou art no Poet may’st not tell thy dreams?”
Since every man whose soul is not a clod
Hath visions, and would speak, if he had loved
And been well nurtured in his native tongue.”

Raffaele Urselli (Phd in African Studies), to whom we express our thanks, shared a few facts about the Bambara language.

Bambara, known as Bamanankan to its speakers, is one of the national languages of Mali and certainly the most widely spoken in the country. Like Mandinka, it belongs to the group of Mande languages that, in West Africa, make up a dialectal continuum to which it is impossible to set clear geographical limits and barriers. Bambara became more widespread during the 18th century due to the expansion of the Bamana Empire. Islam’s diffusion then imposed itself on the Bambara not without some resistance: the term bamankan itself refers to the brave and valiant attitude of ‘those who refuse to submit to their masters’ (Ban ma na). Nevertheless, in the early 20th century, many Bambara people began converting to Islam, despite their historical hostility, as a strategy to oppose the French colonial government. Today, Bambara refers to the Mandingo group, which, together with the Mandinka, Khassonkè and Dioula languages, constitute a dialect group that is understandable to all, from the Ivory Coast to Burkina Faso, Mali and Senegal.